By David Crosby14th August 2019 No Comments

I often produce work by starting with an idea/image in my head and, as I start the process, adapt and change the image as I go, responding to the draft image and new ideas that pop in to my head. I was forming the opinion that screenprinting required a lot of planning ahead and may not fit into my way of working (or make me plan ahead more!) but my latest screenprint was produced in a more fluid way that seems to have worked out.

Halftones can be used to make photo realistic screen prints but I wanted to use them to subvert how we normally see images. So my first layer was produced using a well-known triptych by Bosch, photoshopping halftone and printing onto acetate. 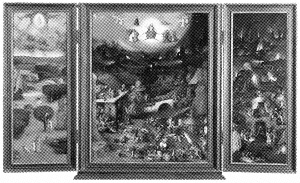 Thinking about the frame (of the triptych) I thought I would just highlight it in the second layer cutting up the acetate. This I did but immediately had second thoughts as it didn’t provide solid edges to the image.

At the same time, thinking of my background theme of The Laboursof Hercules – 3/12 so far), Cerberus, the three headed dog that guards the underworld seemed like an idea that fitted well with the triptych.  So drawing, scanning, a little photoshop tidying, printing onto paper and oiling this up for the exposure; produced my next layer adding three dogs’ heads. 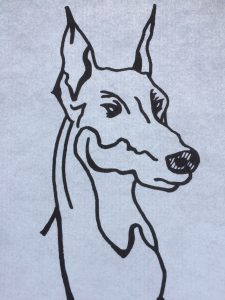 But the frame of the triptych still bugged me – so my thought was to overlay this as the final layer.  I wanted this in the same colour as the dogs’ heads and if I had planned ahead I could have done the frame at the same time.  To produce my final positive to expose I laid a piece of acetate over the image and positioned strips of card.  Keeping to the lines of the original frame didn’t add to the piece (and was hard!) – but breaking the frame and placing it askew worked well for me and I think allows for more interpretations. 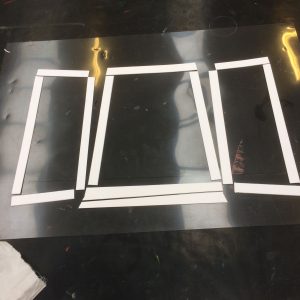 Being an AIR at Ochre allows the time and space for this kind of experimentation.

I’ve also found out that I like registering by using the first pull onto acetate to line up each print individually (although it is stressful when printing). I also played with the AD Colour and System 3 inks further and found they both can produce the rich colours wanted if you stay away from the System 3 white! 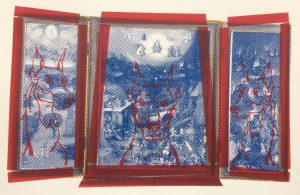 I could plan ahead more – but I’m not sure it gives you the same sense of learning and achievement. But any tips gratefully received.